What is the proper etiquette when riding an E-bike with or among other riders? Is there even an etiquette to follow? I’ve never come across an electric bike etiquette article (except for MTB trail riding) and I think that a few pointers can be a good start to formulate a plan for actual E-bike etiquette. This is how I would start.

I’ve ridden bicycles and E-bikes and I don’t consider myself a “purist” nor do I feel braver because most of my miles are 100% under my own power. 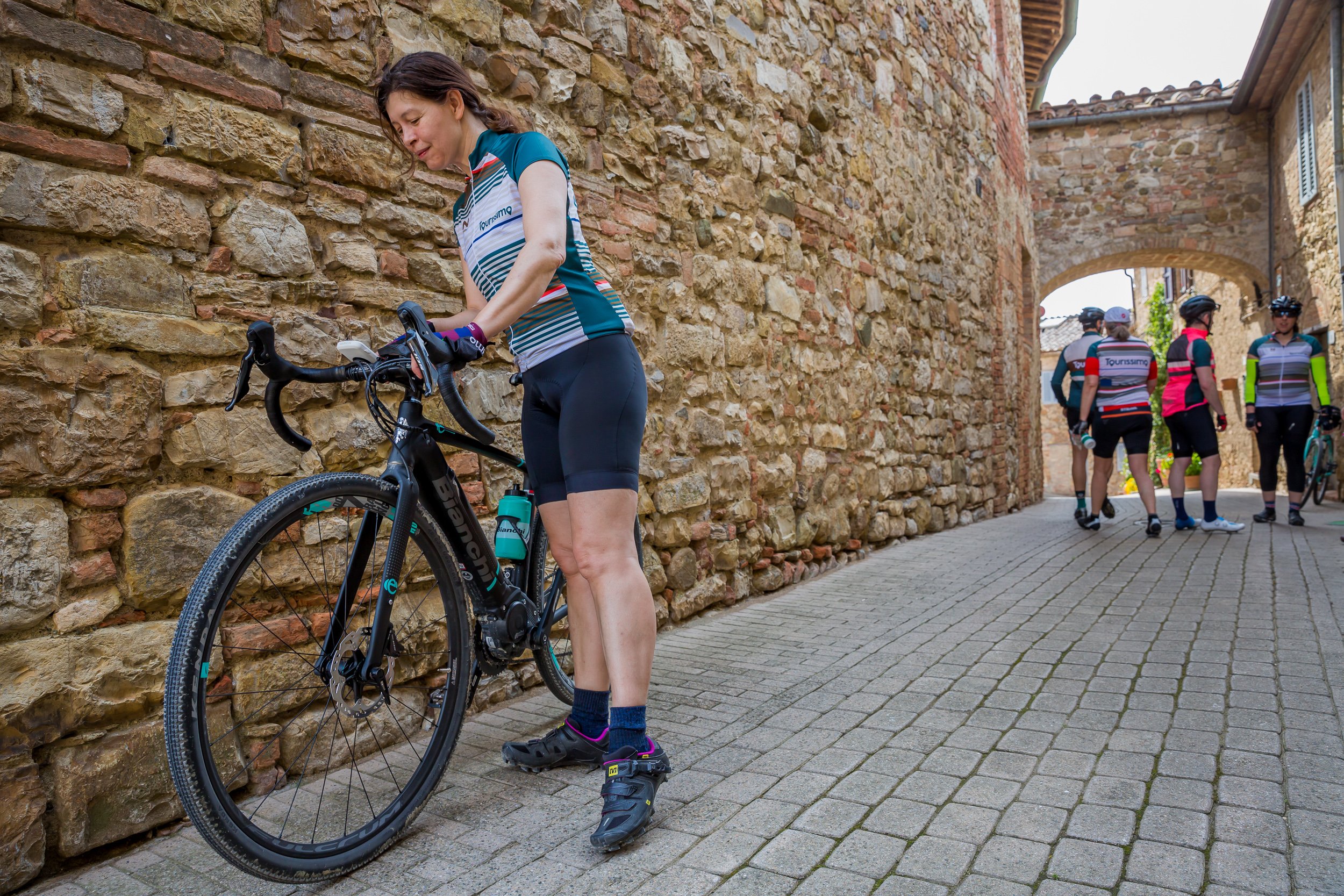 One of our Bianchi Impulso E-road with 70+ miles of riding range.

Don’t call bicycles traditional bikes (or t-bikes), muscular bikes, or any other adjective+bike. They are a bicycle. It is just as annoying as (certain) tandem enthusiasts calling bikes “half bikes.” Some ride electric bikes and some ride bicycle, plain and simple.

Don’t complain about the extra weight of the E-bike or, even worse, talk down the bike as if it were a disadvantage.

An E-Bike weighs 7 to 15 more lbs than a regular bike (I mean…a bike). That’s due to the motor and the battery and also to the fact that the E-Bike needs more robust parts that weigh more but that are more reliable and designed to sustain that extra weight.

When on an E’Bike, don’t wave or smile when passing on a climb. Just keep on going. People struggle on climbs and seeing you flying by with little or no effort could be hard to swallow. Think about the context because it’s all about the context here. Riders do not like to be passed when fighting their way uphill, especially if they are the competitive kind. No matter how you manage this…it could irritate them in this context.

Don’t apologize for passing, either. Just keep on going. Look, you have all the rights to ride an E-Bike and there’s no need to apologize or to feel guilty. And don’t feel bad for others either because they are very likely perfectly fine grinding at their own pace.

Don’t throw a fit if the battery dies. Just like your smartphone, an E-bike battery lasts based on its use. If you use it full-blast it on all of the climbs over a 4 hr ride, don’t be surprised if you have to drag yourself for the last part of the ride without power. Batteries die; it’s a fact of life.

Sometimes, we park bikes leaning on each other if space is limited. It’s not a good practice to lean an E-Bike onto bicycles because the weight is a lot when compared to race carbon bikes with feather-light components that could get damaged (think of a 30 gr carbon water bottle cage that does not come cheap).

Chances are that an E-Bike rider is a newbie. They might not understand that they are entering a community or a tribe with many unwritten rules. E-Bikes are still controversial and the pace at which they are expanding is disruptive. It’s even disruptive from a legislative point of view where insurance and liability can enter into play. I remember long conversations about EU laws and US laws and finding the right balance.

Get the Quick Guide to Cycling Tour Levels and find out which kind of tour is right for you.

We should welcome those who, by choice or by circumstance, are riding a pedal-assisted bicycle because they, too, are riders. Treat them like other riders, coach them or mentor them if they are totally new and willing to embrace the community. Lobby together for better and safer riding conditions. We need to manage our behaviors to avoid alienating each others. Enjoy your time on a cycling vacation without becoming judgmental one way or another because an E-Bike rider is a rider.

Used by permission of Tourissimo.

Follow Us
Sign up for our newsletter!
Copyright © 2022 · Perpetual Motion Adventures · All Rights Reserved · Powered By Cider House Media